“UAV sites belonging to the Iranian forces and militias in Syria”

“Ghadir.M,” a source in Palmyra, told the “Euphrates Post Network” (pseudonym – for security reasons): One of the officers of the “Iranian Revolutionary Guards,” cooperating with the “Lebanese Hezbollah,” is called “Ismail Aseel,” and he is nicknamed “Ismail Aseel.” Abu Fateh, who is one of those responsible for the Iranian military presence at Palmyra Military Airport,In addition to officers and experts from the Lebanese Hezbollah, with the help of non-commissioned officers from the “Assad regime” forces and the intelligence services, he supervises the operation of the drones, within the Palmyra Military Airport. In addition, the source “above” indicates that all the coordinates he obtained accurately, in addition to the information regarding the movements of Iranian forces in the region, were through people belonging to the so-called “National Defense Forces” or members of Iranian militias, These include Harakat al-Nujaba, Hezbollah, and other militias affiliated with Tehran.

Iran’s military drone program has evolved in recent years, and Tehran-backed militias have increasingly used drones in Iran-led tutelage conflicts. This includes the “Houthis” militia in Yemen, which uses drones against “Saudi Arabia,” and “Hamas movement” in the “Gaza Strip” that uses drones to strike points and sites of the Zionist “Israeli” occupation, during conflicts and military operations. short-term surgery; Also, the Iraq-based Shiite militias,It used drones against “alleged” military targets or terrorist groups, however, during which thousands of innocent civilians fell over the years. Iran’s increasing use of this technology, specifically kamikaze planes (in Japanese it means holy wind, when Japanese pilots carried out suicide operations with their planes against the American fleet in October 1944 during World War II)

Drones that fly to their targets and explode in them, are highlighted by the Iranian media, in particular, and other Western media, led by the American ones. Currently, the use of drones has become a source of pride for the “Wali al-Faqih” regime in Qom. Iranian”.

Iran wanted to control and penetrate the lands of its neighbors, such as Iraq, to expand in the Arab and Islamic world, and to benefit from American advances in the field of artificial intelligence warfare; Major General Amir Ali Hajizadeh led these efforts, from 2011 to 2020, and received the personal blessing of Ayatollah Ali Khamenei, the Supreme Leader of Iran. Khamenei clung to the drone program, believed in it, and in the efforts being made to confront the US drone army, and Washington’s first ally, “Israel.”

After an October 20, 2021 attack on the Al-Tanf garrison in Syria, where a few hundred American soldiers are stationed near the Iraqi and Jordanian borders, it was revealed that Iran is increasingly using drones across the Middle East. US officials blamed Iran for the attack, which included five drones.

The Iranians closely watched Israel’s success, and tried to follow its activities in the field of manufacturing and developing drones. The Israeli Heron has been one of the largest drones that has been its backbone since 1990. It was one of the drones that transformed its defense companies into leading UAV vendors in the early 2000s. The Heron became a mainstay as its endurance increased to more than forty hours and a range of more than 1,000 kilometers. Iran watched Israel replace its Searcher II planes with IAI Herons in 2005 and began operating them from Palmachim Air Base.

[Israeli Air Force Commander] Amir Eshel received some of the first products of the Heron, for inclusion in an IAF squadron in 2007. Later the aircraft played a major role in Israeli air strikes on Iranian units in Syria.

In drone wars, propaganda can be just as important as actual progress, and everyone who builds drones seems to be copying them from old technology, and even to this day, Tehran continues to promote “new and homemade” fighters, as it has been recycling Old fighters, more than 40 years old.

Locations and stations of Iranian drones in Syria

Iran’s forces and militias stationed in the Badia region have three main and active sites, including centers for drone flight, including:

The T2 station in Badiyat Deir Ezzor is located according to the following location:

It is linked by a land road to the Al-Bukamal area on the Syrian-Iraqi border, and the station is controlled by the Lebanese Hezbollah militia, and it owns a military base within it, in addition to the presence of several Iranian formations, the most prominent of which are the Iraqi “Harakat Al-Nujaba” militia and the Iraqi “Badr Corps”, and it includes a center The drones are responsible for following up the areas of influence of the international coalition within the 55 km area, which includes the “Al-Tanf” area in the Syrian Badia Triangle.

For its part, the Euphrates Post Network, monitored the presence of activities for the use of suicide and reconnaissance aircraft against the areas of the International Coalition through the station’s unmanned aircraft center.

The T3 station is located east of Palmyra, according to the following coordinates: 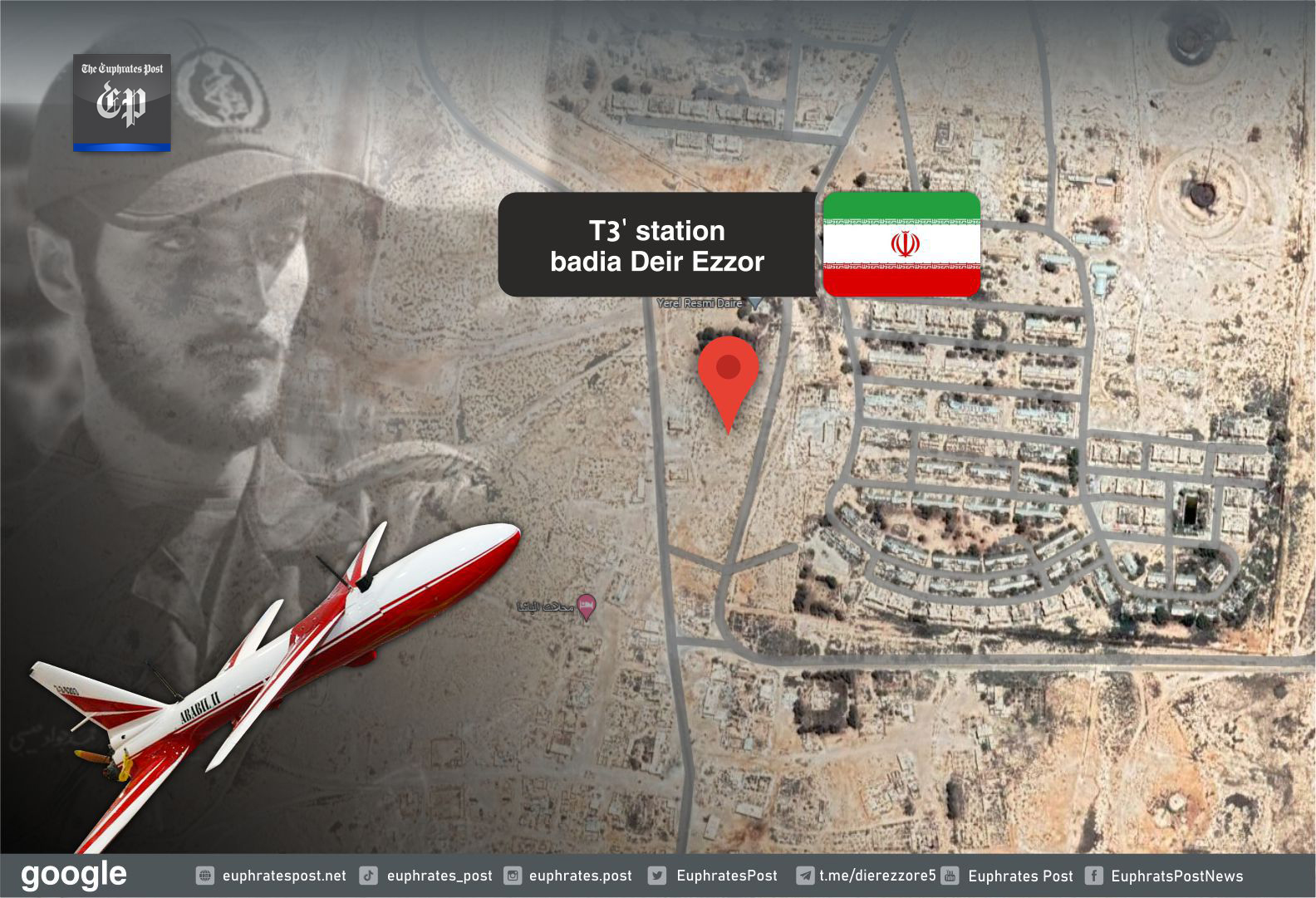 Through “Station T3”, the establishment of groups for the benefit of the Iranian Revolutionary Guard and the Lebanese Hezbollah is secured, and the station includes a command center affiliated with the Iranian forces,

Its tasks fall under the leadership of the eastern Badia fronts of Homs, and the station includes a drone center supervised by the Lebanese Hezbollah, which is concerned with monitoring the areas of the Syrian Badia within the eastern region.

Palmyra Military Airport: It is located in the eastern vicinity of the city of Palmyra, according to the following coordinates: 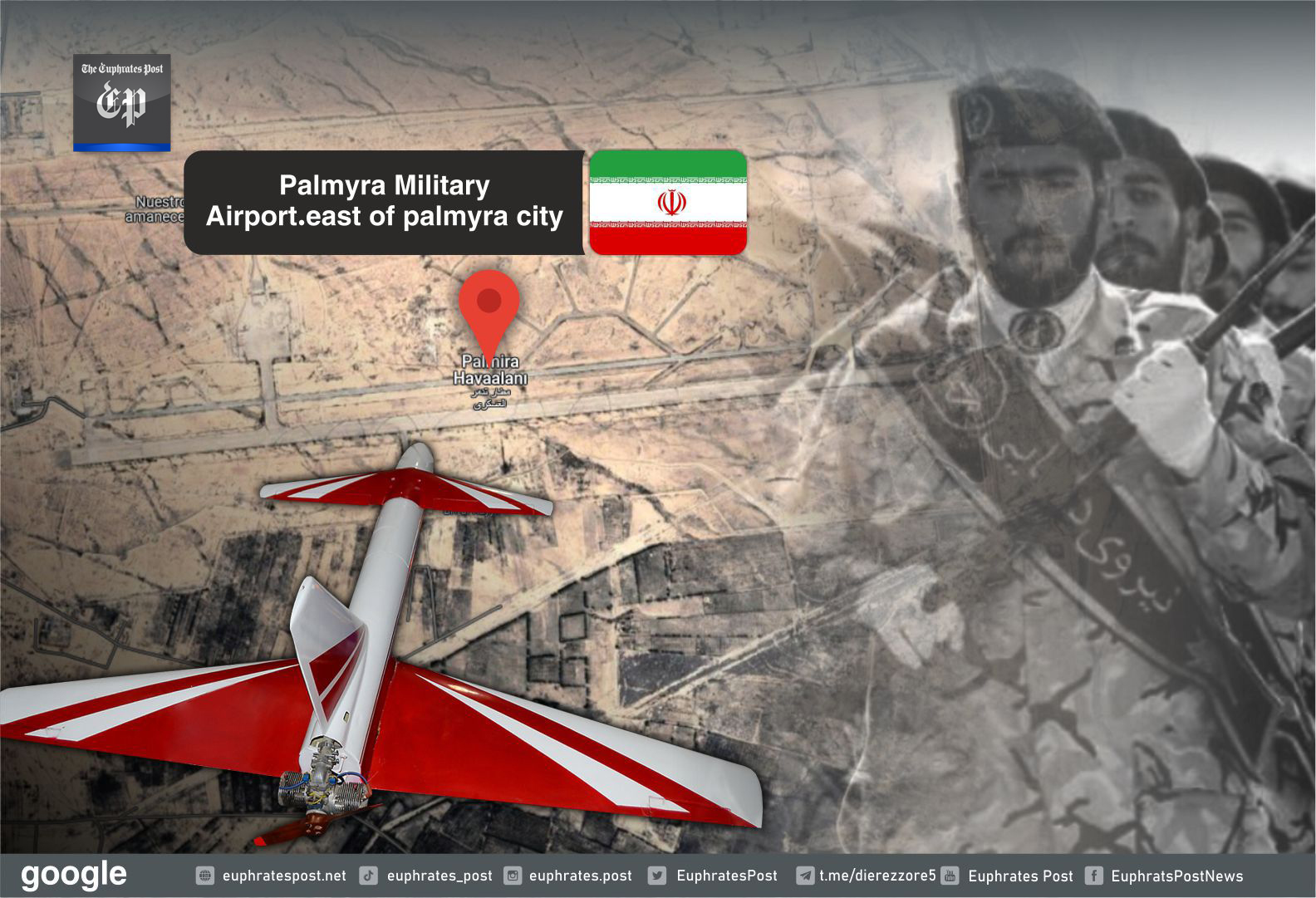 It includes a military base for the Iranian Quds Force, in addition to Iranian military command centers that oversee the transfer of supplies and weapons for the Iranian forces through Palmyra. The airport also includes an Iranian drone center,It is located in the western part of the airport, where the Iranian forces have provided it with Iranian-made Ababil suicide planes, Mirsad type and Muhajir drones specialized in monitoring.

The Iranians and the drone strategy in Syria:

The “127th Brigade” of the Lebanese Hezbollah, which is responsible for managing the drones, and enhancing the level of their deployment within Palmyra Airport and the T2 and T3 oil stations, to raise and develop the level of use of drones, especially against the international coalition areas in an area of   55 km.

The 127th Brigade or Unit affiliated with the Lebanese Hezbollah, which was established by “Hassan Laqis, who was assassinated in December 2013, in the southern suburbs of Beirut” specializes in the field of Iranian drones, and its work includes maintenance and operation. The unit includes individuals and officers specialized in direct supervision of the Iranian marches sector. The unit is highly active in the “Al-Qusayr” area and the eastern countryside of Homs, especially in the Palmyra area; There are also soldiers working for the National Defense Militia, and they are in direct contact with local elements of the Iranian forces, including elements serving at Palmyra Military Airport.

Also, the fighters of Unit 127 who are affiliated with the Lebanese Hezbollah, their movements in Syria are strictly classified, given the areas in which the militia is active. Its members are specialized in operating Iranian drones, including an “Ababeel” drone. The unit’s activities were monitored at Palmyra Military Airport in the city of Palmyra in the eastern desert of Homs.

Unit 127.. Its work and projects in the Syrian Badia

“Unit 127 of the Lebanese Hezbollah oversees the operation of Iranian drones, including reconnaissance planes, through Palmyra Military Airport.”

On June 27, 2022, according to private sources to the Euphrates Post network, drones were seen flying within the airspace of Palmyra and its surroundings. Unit 127 supervised the operation of the marches ,And supervising some drone operations in the region, as we mentioned above.

The cooperation of Unit 127 of the Lebanese Hezbollah is limited to military activities within the Palmyra area with the Iranian Revolutionary Guards, due to the fact that the Iranian forces are the main control over the city of Palmyra in the eastern desert of Homs.

The Euphrates Post network monitored joint activities in the field of operating Iranian drones within Palmyra Airport, with the presence of groups of the Iranian Revolutionary Guards, on 6-20-2022. The activities included testing new Iranian drones, which were recently transferred from Iran to the airport.

Palmyra Military Airport, which includes the centers of “Unit 127” and includes the sites used inside the airport according to the following coordinates: 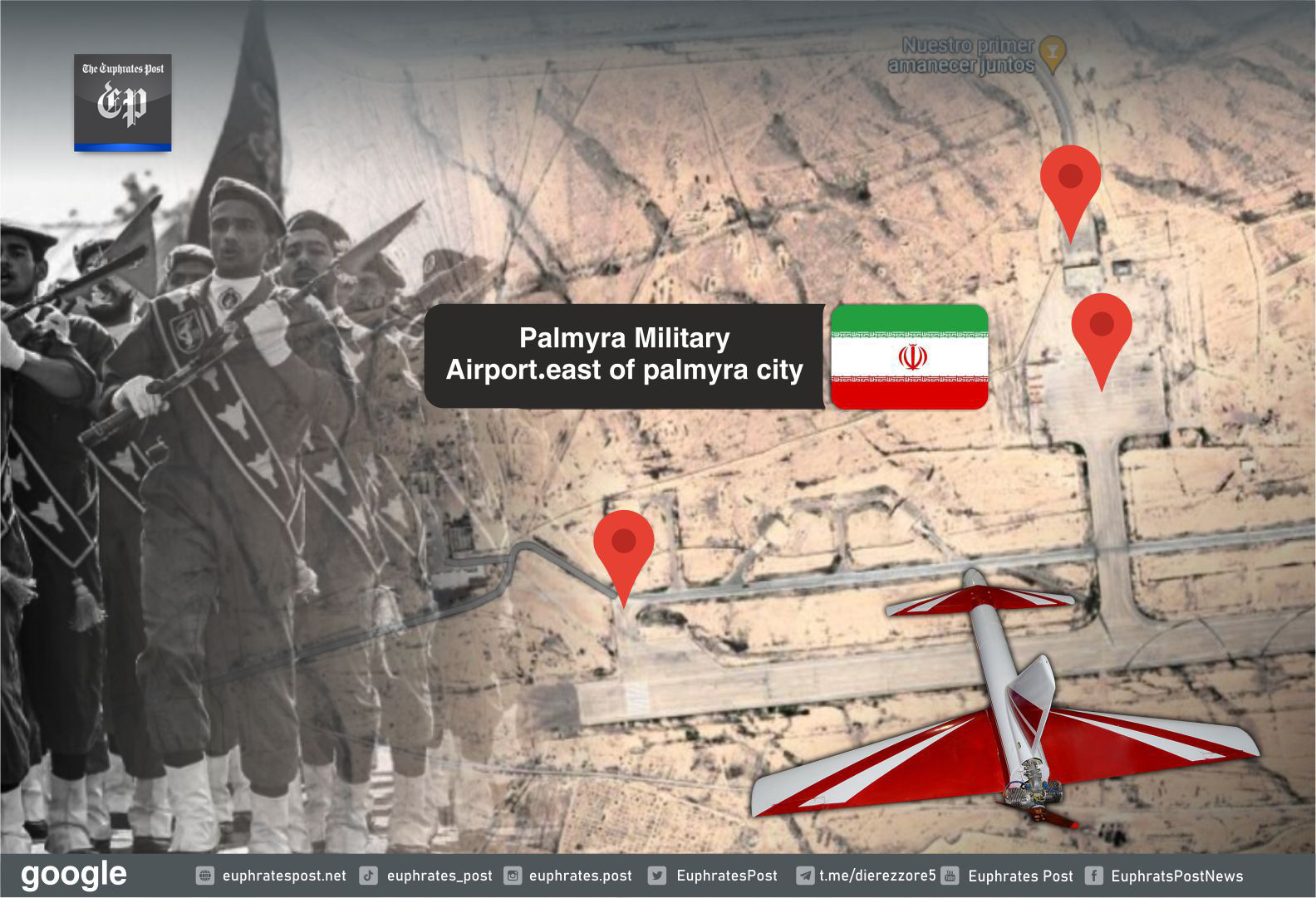 Today, the Iranian experience with drones has evolved significantly. With Iranian technology on drones in Gaza, Yemen, Lebanon, Syria and Iraq, Iran is playing an increasing role as a rising superpower in the region. However, there are limitations to the capabilities of Iranian UAVs. Most of the drones used against Saudi Arabia via Yemen, or US forces in Iraq and Syria are suicide drones, flying with pre-programmed coordinates to strike targets.

These Iranian capabilities are related to accuracy, through the use of several drones simultaneously, and the Iranian drone program has had an impact, throughout the Middle East, and policy makers should take this into account while looking for defensive positions, discussions and conferences with the countries of the East middle. The area affected by the drone.

Hours after the arrival of Iranian missiles, the...

(Wheat with safe hands and factions from the...

The most recent of which is bread …...

The Revolutionary Guards “opens a camp in the...

More than 90 percent of the population is...

Statement of a “mistaken” military formation in the...